Here at Luso HQ, we are big fans of a game called DipSticks

. The game consists of a set of thin, cardboard strips with a question on each side. Contestants draw out a stick and have to perform a charade or some other task. Whoever answers correctly gets to keep the stick. 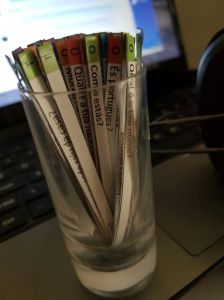 Now, there are only eight days left until the exam (*cue sound of screaming*) and I was trying to think of ways to cram in as much spoken Portuguese as I possibly can, so I hit on the idea of making my own DipSticks, but with Portuguese questions instead of charades. Each one has the same question each side, with one written in the “tu” form and one in the você form. My daughter is quite into the idea, which I like because, well, really anything that gets her learning about language is a plus in my book. The categories are loosely based on the “pontos de orientação” from the “Contatos Sociais” section of an old DEPLE paper published by TELC that I have somehow (how? I can’t remember) got hold of, so hopefully these are the kinds of questions that are likely to come up in the real exam.

The idea is that m’daughter will pick a card and read it out, possibly with some help, and I will try and give an answer at the drop of a hat. If I get a plausible answer with minimal umming and ahhing, and my pronunciation is close enough to at least not be misunderstood, then I win. If not, no stick for me.

You can download them as an excel file here if you’re interested. Just print them out on some nice thick printer paper (I used the same coated paper I use for printing photographs, but I’m sure some decent chunky CV paper would do the job just as well) , fold it in half along the centre line, glue the two sides together and cut them into sticks. They fit nicely into these funny little glasses somebody gave us, as you can see. A shot glass or even an egg cup would probably work just as well though.